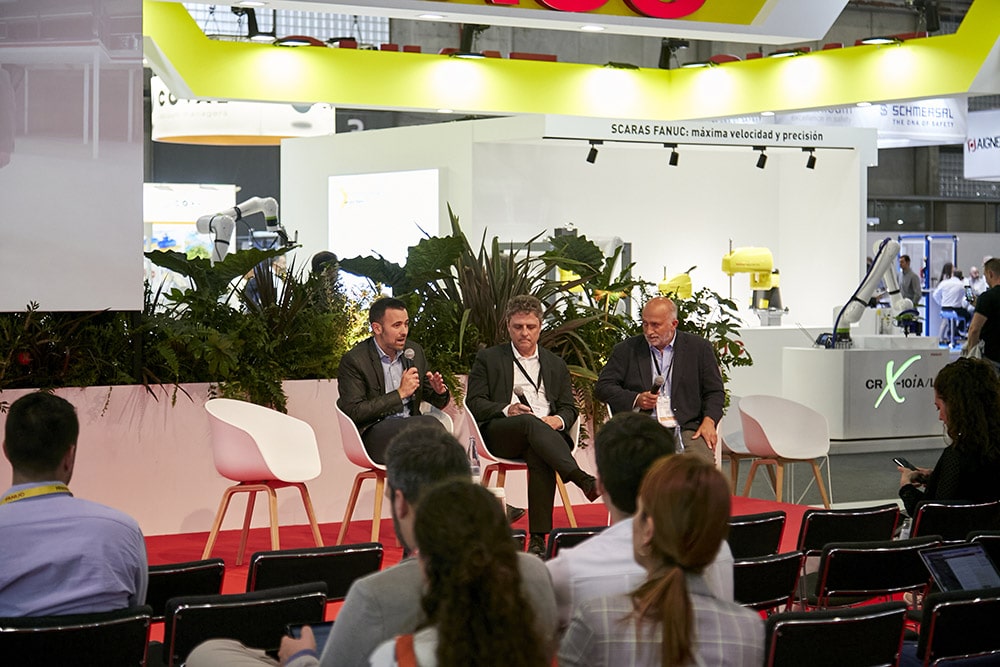 Four proposals outlined during the Hispack sessions confirm that we can

On the one hand, the market is demanding smaller and more customised batches and products with shorter life cycles. On the other, production companies from all the sectors (food & beverage, retail, pharma & chemical, etc.) are striving to amortise their existing equipment and facilities (brownfield) while integrating new technologies to secure greater connectivity and digitalisation. The premise is that an unconnected machine is not up to the requirements of current-day packaging.

Several Unboxing sessions in Hall 3 of Hispack 2022 debated how to ensure the machine’s full integration and connectivity: Some of the most notable proposals included B&R’s adaptive machine, ABB’s robotic integration, Schaeffler’s predictive maintenance and the addition of a layer of connectivity to Cavas Vallformosa’s old machinery by Difmaq.

A digital layer to update the brownfield machinery of Cavas Vallformosa (Difmaq and TAI Smart Factory).

As part of the Smart & Sparkling project, Difmaq and TAI Smart Factory worked in partnership with Masía Vallformosa to adapt its bottling process, and, more specifically, the labelling of its sparkling wine line, to the Industry 4.0 concept. The machinery used by the Catalan wine and cava company guaranteed a fairly long lifespan but it was not designed to be connected. How can machines from previous generations take part in the digitalisation process? “There’s no standard for updating brownfield machinery, as we need to see how it can be done in each specific case,” explained Alberto Ferrai, Difmaq’s general manager, who pointed out that for Vallformosa the key was to add a digital layer to the labelling hardware and provide the entire line with a predictive maintenance platform to improve its operational efficiency.

The re-engineering process has enabled Vallformosa to reduce its process times considerably, secure more streamlined format changes and ensure the full operation of the machinery as a result of the predictive maintenance policy. “We moved on from having fully isolated machinery whose operations were not wholly known to us, to having a machine that is connected to an analytical platform, thus providing greater control over the labelling process,” explained Lluís Canyadell, industrial director at Vallformosa. The project clearly enhanced the sensor system used by the line it was applied on, one that produces 12 million bottles a year, and tracked the risk of obsolescence of the electronic components. It also added a software layer with programming that can be reused on other projects.

In the immediate future the company hopes to add IoT and artificial intelligence capabilities to the line, thus succeeding in going one step further in its digitalisation process.

Combination of smart conveying and delta robotics (Beckhoff and Packfeeder).

The key to the project relates the robots to the outbound transport and “great accuracy of movement is achieved within a small space,” explained Lluís Moreno, sales director for Beckhoff Automation in Spain. Pickfeeder can sort bottles made of varying materials and of very different sizes and shapes without any mechanical modifications to the production line.

The machine’s most important innovation lies in the separation of the input area, where the bottles arrive in a lying position, from the output area, where they are placed upright on the conveyor belt: “Conventional systems perform both steps with robots. Using the delta robots solely to pick up the bottles in a lying position enables us to use smaller and less expensive robots but still exploit their speed to the full.”

An adaptive machine can be defined by four main features, explained José Expósito from B&R Industrial Automation, namely profitable production of small batches, no downtime due to changeovers, availability for as-yet-unknown future products and faster time to market. “An adaptive machine can modify formats at the touch of a button and even produce a range of products at the same time.”

The adaptive machine is based on a combination of new and existing technologies. The defining components are track-based conveying, machine vision, integrated robotics and digital twins.

The smart track-based conveying systems move each individual product along the line. The smart machine vision system automatically recognises the shape, size and orientation of a product and conveys this information to a robot in less than a millisecond. The robot picks up the product at high speed, positions it as required and then carefully places it on a shuttle in the lane system. The digital twin can simulate the entire manufacturing process, even before the physical equipment exists.

Until recently, the automated diagnosis of bearings and the calculations of their residual service life was a non-existent area of maintenance: only scheduled maintenance was used to ensure the proper functioning of these elements of the machinery.

At Hispack 2022 Schaeffler demonstrated that it is vital to promote the automated diagnosis of the bearing to ensure true predictive maintenance of the machine. These units are not just used in machine tools, as they can also be found in conveyor belts, presses and so on. Given that the drives of the machines work practically without any interruptions, they require intensive maintenance to prevent any unscheduled stoppages. The operators must be aware of the condition of the drive components at any given time because these are core elements of the machines.

Using the actual load spectra collected during the operations, Schaeffler can calculate the residual service life of the bearings at freely defined intervals by means of FAG SmartCheck. By analysing this information gathered with the BEARINX calculation tool, customers will be able to check the residual service life of each bearing in the machine using an online mobile device. The maintenance of the production machinery can therefore be performed based on the loading conditions, in keeping with the requirements, rather than being based on specific intervals and serious breakdowns.

In search of more sustainable and smarter cosmetic packaging

When decarbonisation reaches the packaging supplier; the Roca Group’s tips to achieve NetZero